Photos of events at the club 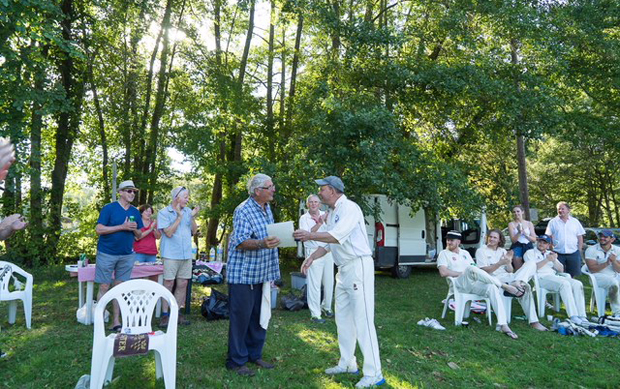 The following is a gallery of photographs taken during the various social events organised in support of the Catus Cricket Club.

Click on a photo to enlarge, then click on the right side to view the next photo.

The following were the winners of the awards for the 2015 season:

The photo shows Richard Harris receiving the Catus Players Player Award for the 2012 season. Richard also won the best batsman award. Best bowler went to Shafik Islam. The champagne moment awards were as follows: Rob Allen for a superb 92 not out in the Siddals Cup Semi-final against St. Aulaye. J Patras for a ferocious bowling spell also against St. Aulaye and included the dismissal of the French under 18 captain, caught and bowled for a duck.

Finally to Club President, Martin Kavanagh, who after over 40 years of competitive cricket finally scored his first 50 this season. The annual dinner marked the end of a highly succesful season for Catus.

A great evening was had by all with a top notch five course meal provided by the ever obliging Jean Christophe and Patricia at the Auberge Sans Frontiers Degagnac.